The world’s negative-yielding debt has soared to over $18 trillion according to Bloomberg. In such times, it is no surprise that the decentralized finance space, a place where mouth-watering yields can be found, has become an investor favorite.

Due to high investor demand, Coinbase pro has recently added support for several DeFi tokens. Expanding its offering further, the cryptocurrency exchange has announced that it will extend support for Aave, Bancor, and Synthetix starting today.

History suggests that when Coinbase lists new tokens, their prices jump in the short term, a trend that can also be seen in the recent price action from AAVE, BNT and SNX.

Bancor has attracted increased investor attention after the launch of Bancor v2.1 and the introduction of BNT liquidity mining pool. The protocol has been adding two new tokens every two weeks to its liquidity mining program and this is attracting new investors. These initiatives have increased the total value locked from $15 million to over $85 million. 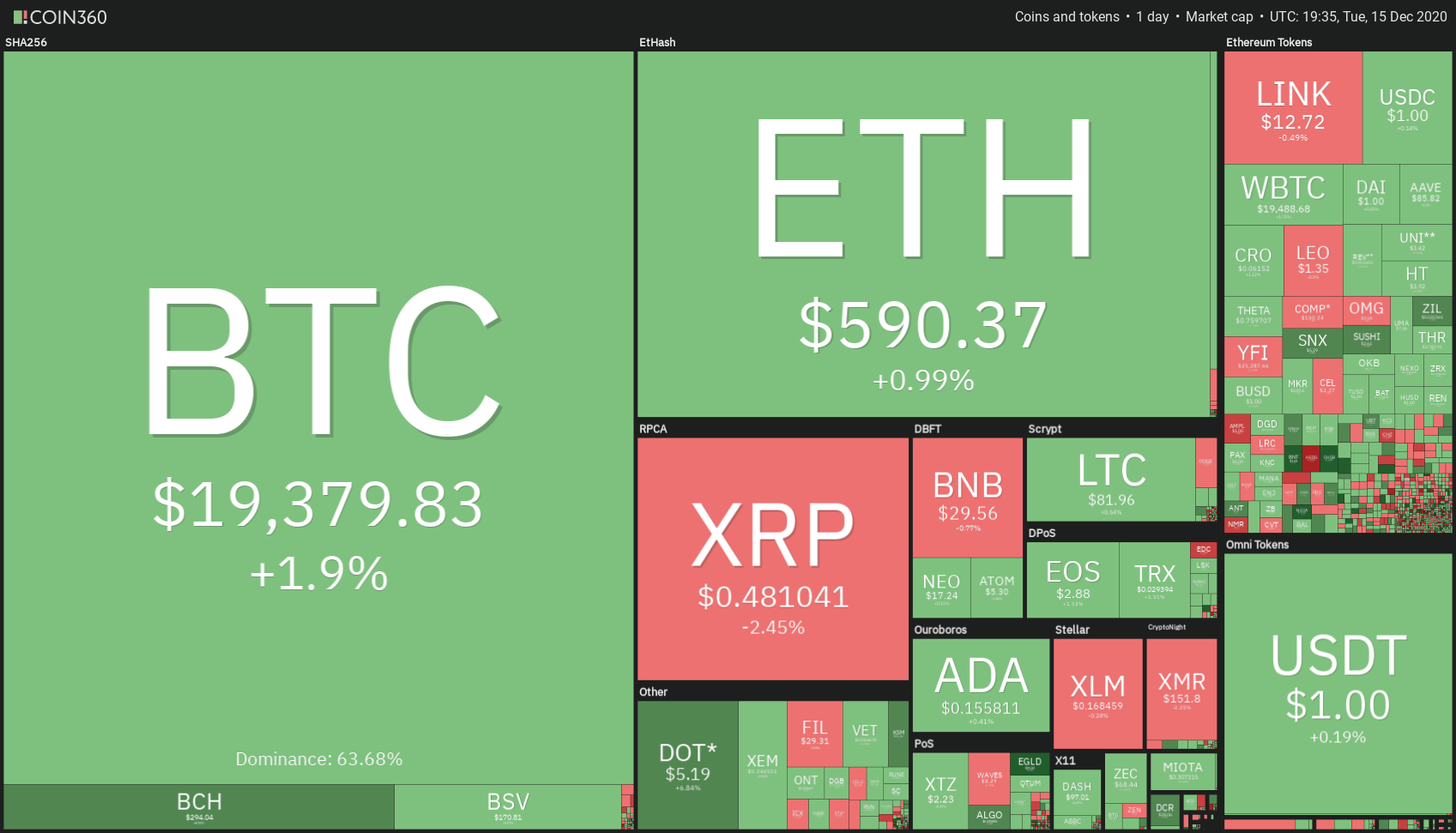 The excess liquidity sloshing around the globe has resulted in a bull market across several asset classes. Hence, the derivatives liquidity protocol Synthetix has attracted traders who are looking to maximize their returns trading various crypto and legacy markets.

Synthetix recently announced that it would invest 100,000 sUSD in the portfolio managed by a selected community member and the revenue generated by the dHEDGE portfolio will be awarded to the manager.

This program offers savvy traders an opportunity to increase their rewards by managing a large pool of Synths and enables other traders to benefit by investing in portfolios managed by successful traders, a win-win situation for everybody.

The third token making waves for its strong price action is SushiSwap's governance token SUSHI. As reported by Cointelegraph, the exchange's recent merger with the DeFi giant Yearn Finance has captured attention from bulls. This was recently covered in detail by Cointelegraph. Quantstamp has recently started an audit of SushiSwap protocol, which could further increase confidence in the platform.

Institutional investors have gradually warmed up to cryptocurrencies and several popular names have publicly disclosed their Bitcoin investments in the last few months. There is a possibility that some investors with a higher risk appetite could become interested in the DeFi space, which could boost the prices of these tokens.

While fundamentals are in favor of higher prices, let’s look at the technicals to ascertain the path of least resistance. 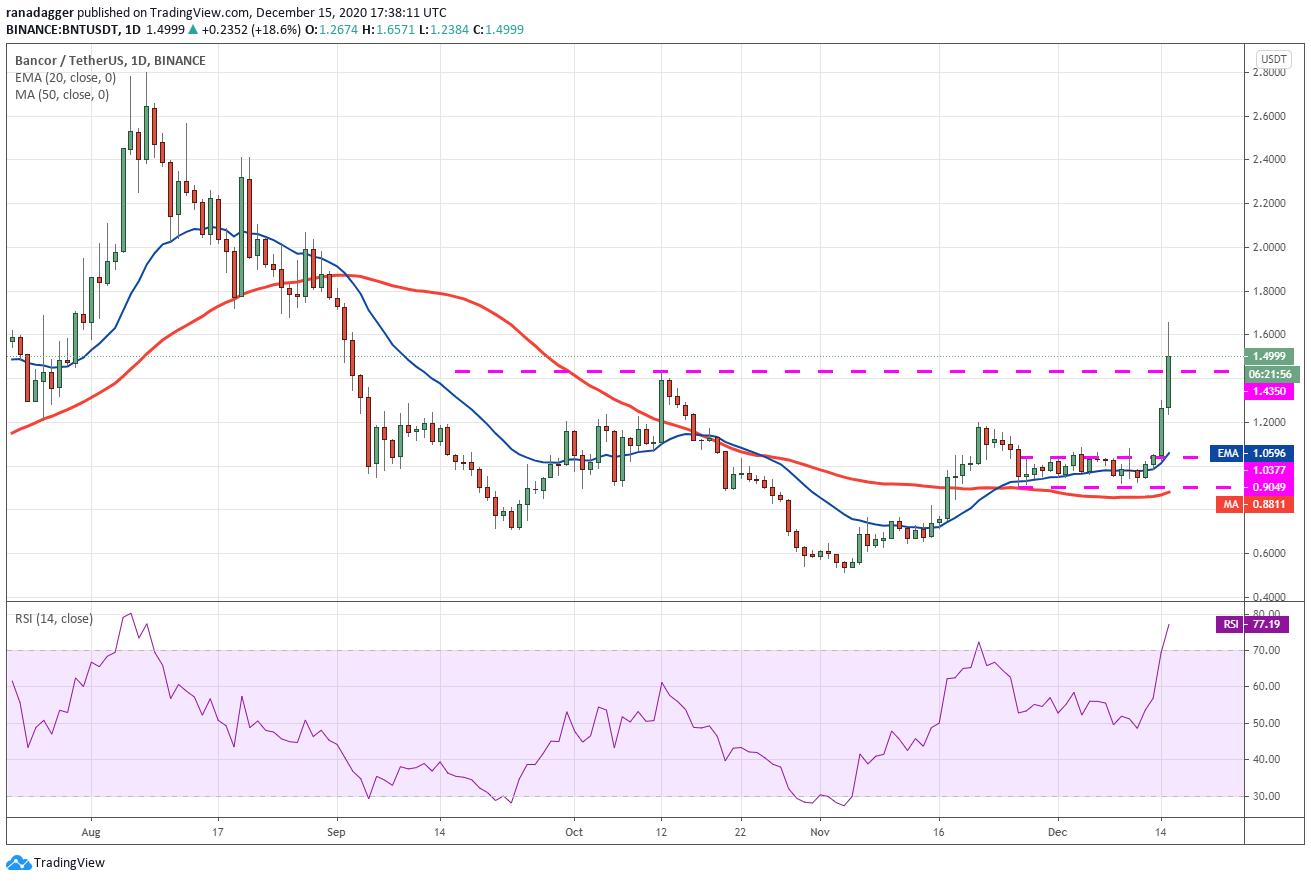 The bulls have pushed the price above the stiff overhead resistance at $1.435 from where the rally had reversed direction in mid-October.

If the bulls can sustain the price above the breakout level, the BNT/USD pair could rally to $2 as there is no major resistance in between. If the momentum can carry the price above $2, the rally could extend to $2.40 and then to $2.80.

The 20-day EMA ($1.05) has started to turn up and the RSI is in the overbought territory, which suggests that the bulls have the upper hand.

Contrary to this assumption, if the bulls fail to sustain the price above $1.435, the bears may attempt to pull the price down and trap the bulls. A break below $1.20 will signal advantage to the bears.

The bulls are currently attempting to push and sustain the price above the $5.50 overhead resistance. This level has been a major roadblock for the bulls in the past few days as the price has repeatedly turned down from it. 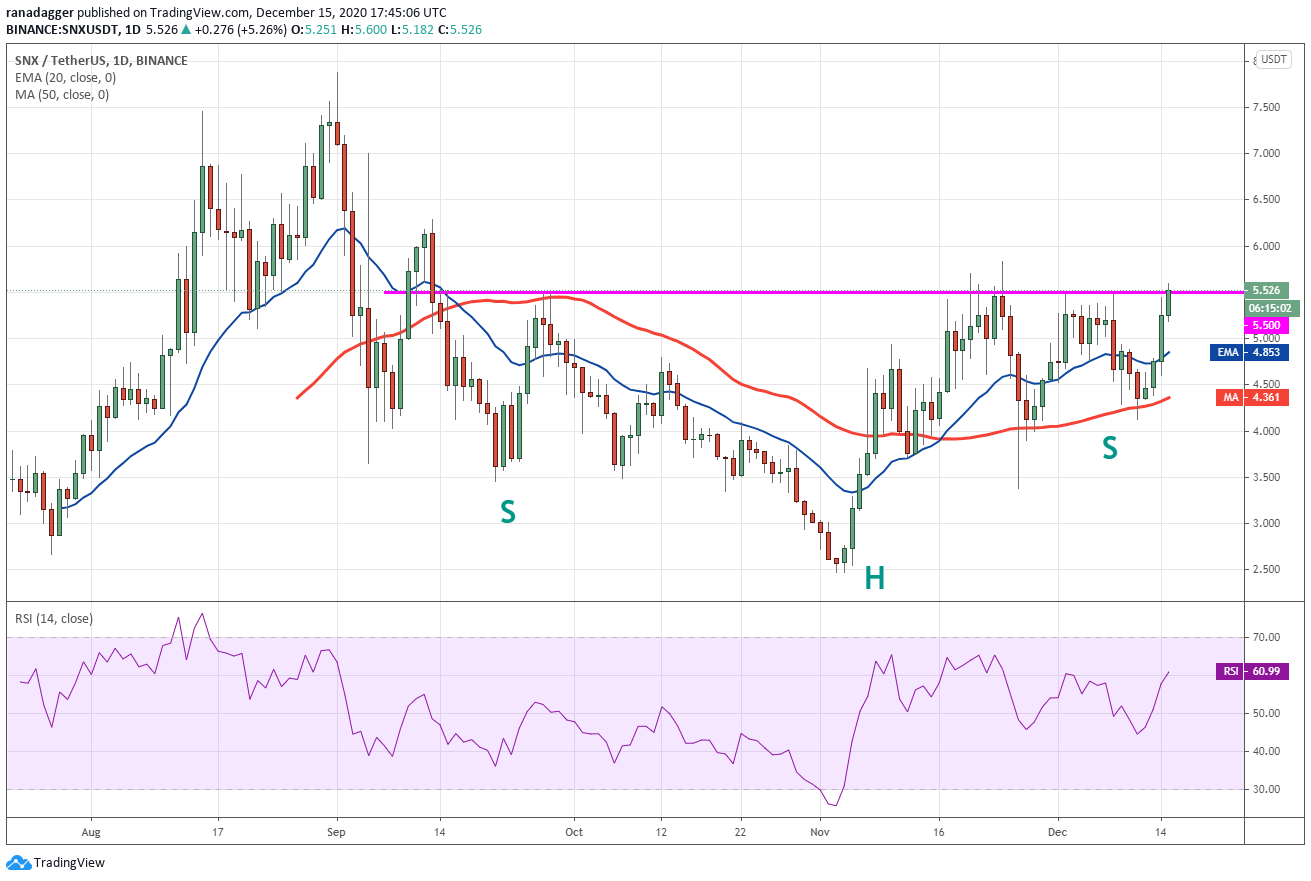 However, repeated retests of a resistance level in a short duration tend to weaken it and increase the possibility of a break above it. The gradually rising 20-day EMA ($4.8) and the RSI above 60 suggests that the bulls have the upper hand.

The SNX/USD pair has formed an inverse head and shoulders pattern that will complete on a breakout and close above $5.50. This bullish reversal setup has a target objective of $7.50.

Contrary to this assumption, if the price again turns down from the current levels and breaks below the 20-day EMA, the pair may consolidate between $4 and $5.50 for a few more days. The trend will turn in favor of the bears if the price slips below $4.

The altcoin has been making a series of higher highs and higher lows since bottoming out in early November and currently the bulls are attempting to push the price above the stiff resistance at $2.46. 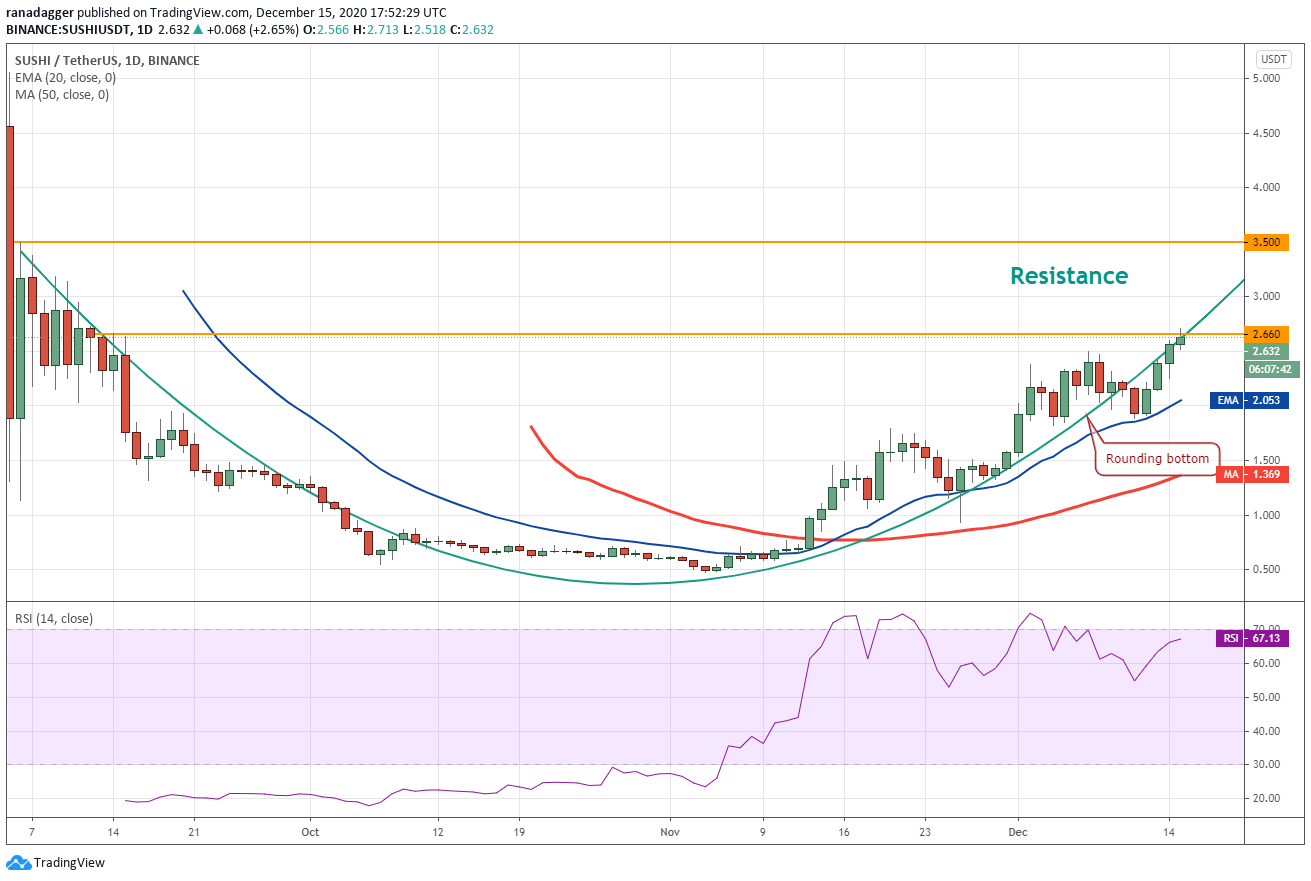 If they succeed, the SUSHI/USD pair could move up to $3.50. This level is likely to act as a stiff resistance but if the bulls can drive the price above it, the pair will complete a rounding bottom pattern that has a target objective of $6.50.

The upsloping moving averages and the RSI near the overbought territory suggest that the path of least resistance is to the upside.

The views and opinions expressed here are solely those of the author and do not necessarily reflect the views of Cointelegraph. Every investment and trading move involves risk, you should conduct your own research when making a decision.