After a rather lengthy wait, Bitcoin price is finally back to the same price range it was in 3 years ago. Back in 2017, when the Bitcoin (BTC) price peaked near $19,900, most altcoins also posted 200% or higher weekly gains.

Fast forward to the present time, and BTC's $19,100 price is virtually identical to where it was on Dec. 17 2017. One might think that not much has changed, despite some altcoins crashing, but that couldn't be more distant from the truth. 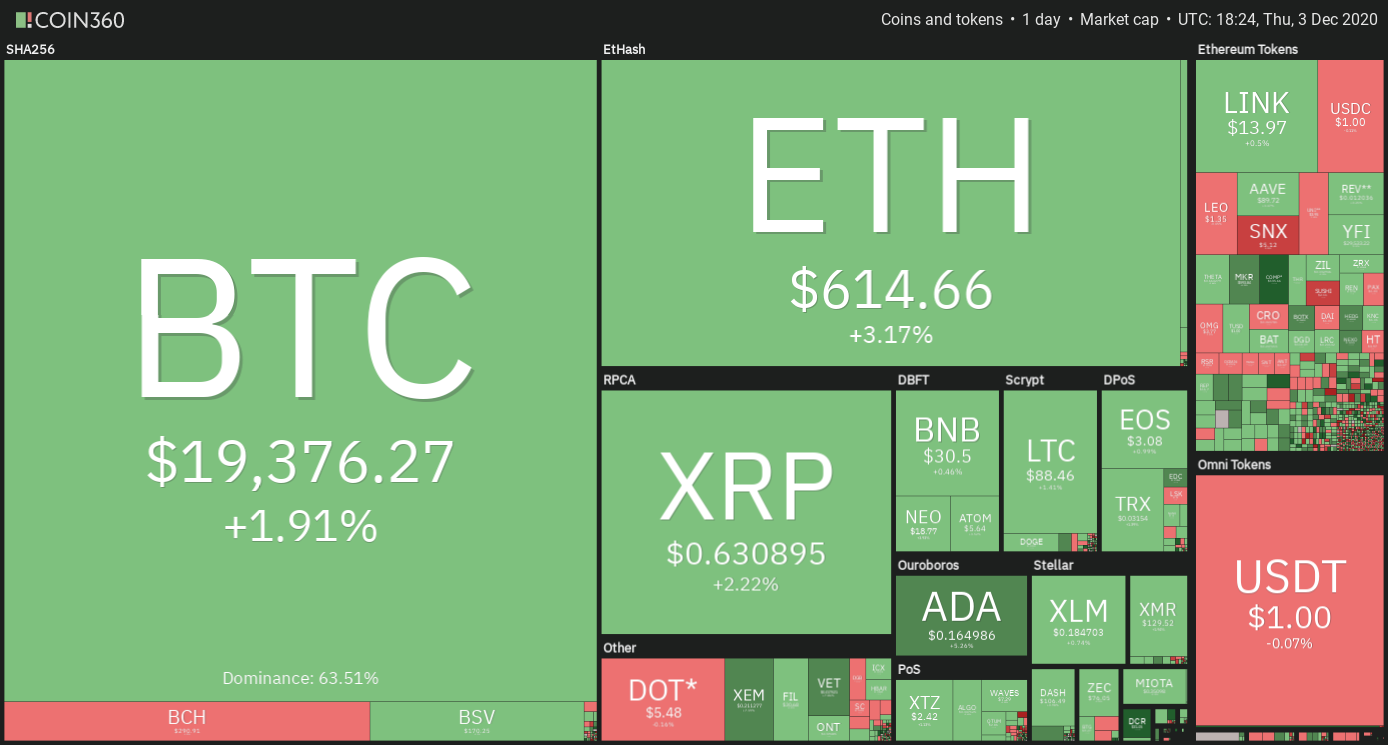 A lot has changed in the cryptocurrency sector, and compared to 2017, a significant amount of necessary infrastructure has been built.

Today there are tightly regulated derivatives offered through CME and CBOE futures contracts launch, and the rapid growth of institutional investors is providing an unending source of demand for Bitcoin.

Compared to 2017, there is a wealth of easily accessible data related to price and market capitalization ranking. This should help investors better understand how today's market differed from the market in 2017.

We can better understand how the cryptocurrency market may look in a couple of years by analyzing the differences. 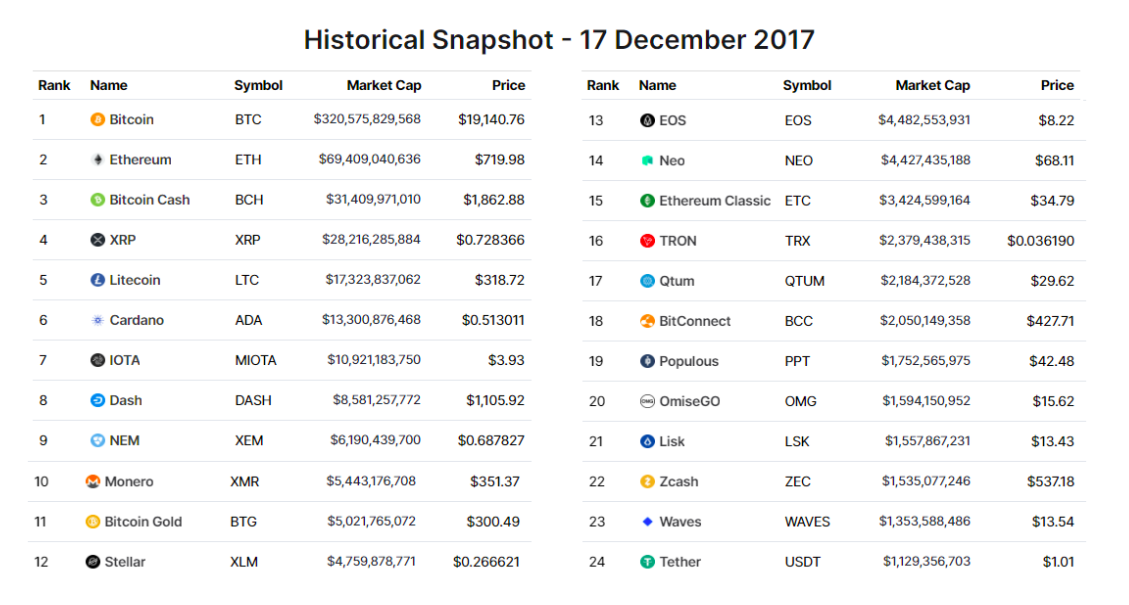 Regarding the ranking of cryptocurrencies by market capitalization, four of the top five remained the same. Oddly enough, Ether (ETH) and XRP’s market cap are relatively the same at $69 billion and $28 billion, respectively. This movement happened despite both cryptocurrencies seeing a 15% price drop since December 2017.

This effect is caused by the issuance of new coins. For example, Ether's coin supply rose from 96.4 million to 113.7 million. The equivalent inflation amounted to 17.9% over three years. For comparison, the total number of Bitcoin in circulation increased by 10.8% in the same period. 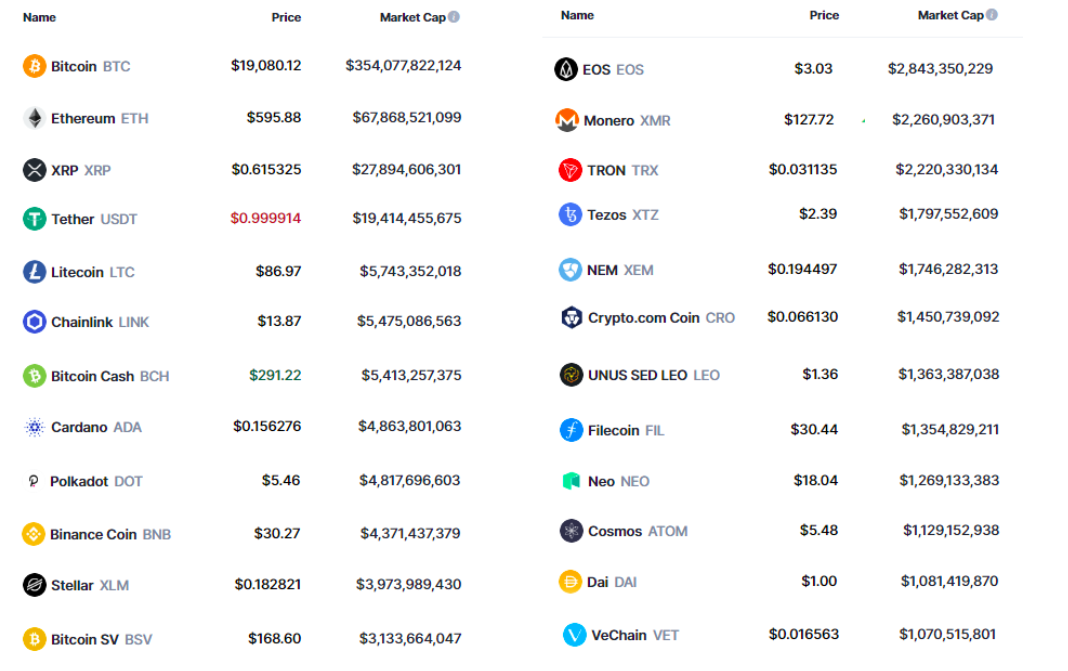 It is worth noting that out of the current top-15, the only newcomers are Chainlink (LINK), Polkadot (DOT), and Binance Coin (BNB). It should also be noted that Polkadot was not in existence in 2017 or 2018.

On the other hand, Ether competitors like Cardano, EOS, NEO, Ethereum Classic (ETC), and QTUM seem to be losing ground. In the past year, they have been replaced with interoperability tokens like Chainlink and Polkadot.

One would automatically assume that Bitcoin dominance vastly increased in this time, but it rose by only 2% to the current 63%. This effect is only possible by the addition of hundreds of new tokens. The three sectors that stand out are exchange-tokens, stablecoins, and lastly, the decentralized finance (DeFi) sector.

As previously mentioned, neither CBOE nor CME futures existed back in Dec. 2017, let alone with relevant liquidity. The same can be said from institutional investors' praising and effectively investing in Bitcoin.

More recently, even BlackRock CEO Larry Fink seems to be somehow optimistic about Bitcoin becoming an asset class by itself.

Thus, the odds of BTC and Ether being flipped becomes smaller as time goes by. Besides their dominance in the derivatives markets, the BTC and Ether 97% concentration of Grayscale Investment funds provides some insight into this theory.

Key factors that will impact the next bull run

Trying to predict massive future market shifts is a daunting and usually ineffective strategy. Nevertheless, a few conclusions can be drawn from this comparison.

According to the Lindy effect, the life expectancy of some technologies is proportional to their age, and the longer their survival, the longer they can be predicted to exist.

If this paradigm is applied to the sector, one might conclude that the longer a cryptocurrency stays in the top-12, the higher the probability it shall remain relevant three years later.

For example, the Bitcoin and Ethereum ‘killer’ narrative was incredibly popular in 2017 and 2018 when competitor blockchains were forecast to overtake the sector leaders because of their faster throughput, cheaper fees, and enhanced scaling or ‘real-world use.’

Although those narratives may have sounded smart back in 2017, time has proven that the network effect stands. The best technology does not always win.

Another unique phenomenon in the crypto sector that investors should watch out for are hard forks and codebase clones. Back in 2017, Bitcoin Cash (BCH), Bitcoin Gold (BTG), Ethereum Classic (ETC), and DASH forked or had competitive clones launched. Initially, they prospered but reviewing their price and market cap shows that their success was short-lived.

The total coin supply and the issuance rate of a cryptocurrency can also impact its price performance. Cryptocurrencies with high issuance might experience difficulty catching up in price. That includes XRP, Chainlink (LINK), Polkadot (DOT), Stellar (XLM), Tron (TRX), and Tezos (XTZ).

Even though each of these has plenty of convincing real-world applications and impressive partnerships, their massive coin supply makes sharp upward price moves difficult.

Retail-driven flow will almost certainly push some altcoins higher, except this time around, there are some with real use-cases.

The views and opinions expressed here are solely those of the author and do not necessarily reflect the views of Cointelegraph. Every investment and trading move involves risk. You should conduct your own research when making a decision.