Bitcoin (BTC) and other major altcoins are either stuck in a range or are witnessing a correction. However, that is not the case with the entire crypto space because a few tokens have been outperforming major cryptocurrencies by a considerable margin.

In a world where yields have plunged to negligible levels, the DeFi ecosystem has attracted investors’ attention. Data from Dune Analytics shows that the number of unique Ethereum addresses participating in various DeFi protocols has surged from about 91,000 to over 1 million in a year.

A few analysts have warned that while these numbers look encouraging, the actual number of unique users may be much smaller, as many DeFi users could be using multiple addresses. Despite this possibility, there is no denying the fact that the growth in DeFi has been phenomenal.

Compound, the fourth-largest DeFi platform by total dollar value locked, has made a strong comeback since Nov. 26 when $89 million worth of collateral was liquidated when the price of Dai surged to $1.3 on Coinbase and Uniswap. These price feeds are used by Compound.

Although Compound's protocol worked the way it should, its reliance on just a few data points for oracles came under criticism. As this was a one-off event, the price has surged back on hopes that a solution to avoid such liquidations in the future has been reached. 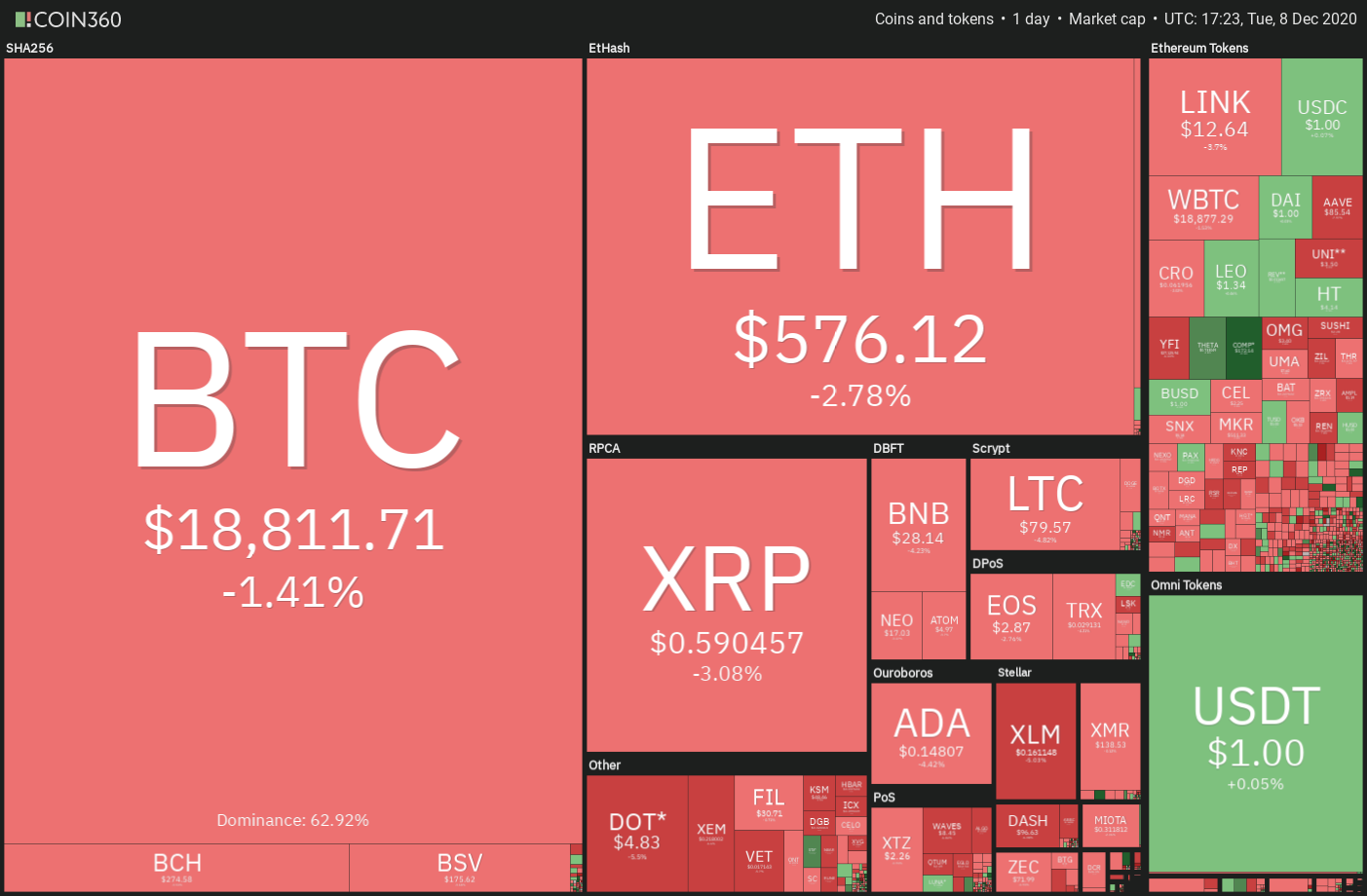 Another token that has made a strong dash to the upside is Waves. The team behind the Waves protocol recently announced a partnership with OKExChain, a public blockchain developed by digital-asset exchange OKEx, to build decentralized applications and developer-friendly tools.

Waves' Gravity protocol will enable OKExChain to connect and transfer assets across multiple blockchains. Assets in the Waves ecosystem can be used on decentralized exchanges built using OKExChain. Developers and traders from both ecosystems can hold, exchange and use tokens issued on both the Waves protocol and OKExChain.

The gaming industry and crypto tokens related to it have also zoomed higher in 2020 as people have been forced to stay at home due to the coronavirus pandemic. Growth within this sector also catalyzed a strong move among the nonfungible tokens, or NFTs, used in many blockchain-based games.

One of the most popular blockchain-based and NFT games of 2020 is Axie Infinity. In the game, players are tasked with building a digital landscape and battling their pets against other players, similar to Pokemon and Tamagotchi. The increasing downloads and over 4,500 active participants have also increased the demand for its Axie Infinity Shards (AXS) token.

While the fundamentals of each company have been positive, do the technicals project further upside?

Let’s analyze the charts of these three tokens to find out.

COMP has rallied from an intraday low at $100.32 on Dec. 1 to an intraday high at $179.48 at press time, a 78% rally in a week. The 20-day exponential moving average ($127) has turned up, and the relative strength index (RSI) has entered the overbought zone, which suggests that bulls are in control. 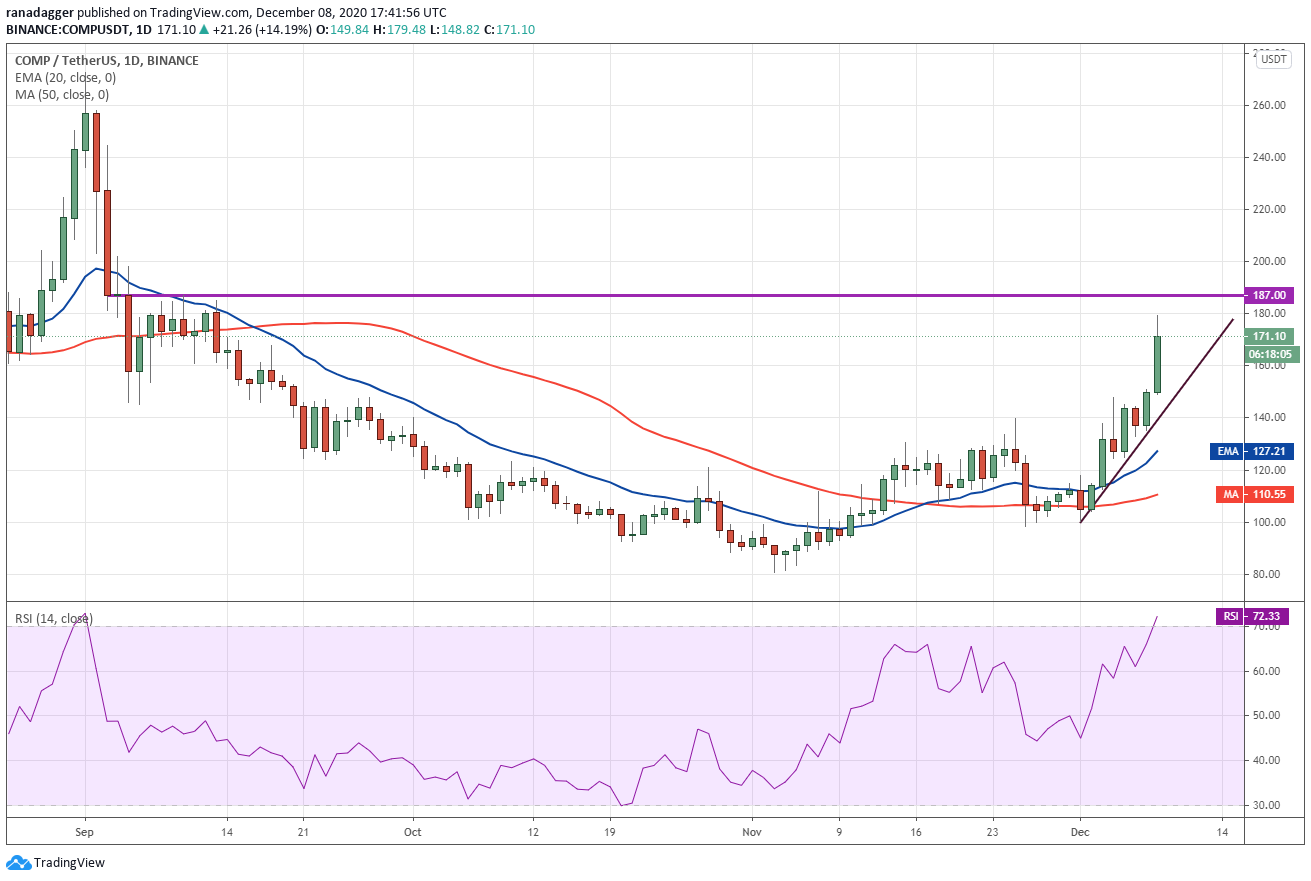 Typically, overbought readings on the RSI is considered bullish, especially when coming out of a bottoming formation because it shows aggressive buying by traders.

The COMP/USD pair could face resistance in the zone between $187 and $200. However, if the price does not give up much ground, it will suggest that traders are not booking profits on their positions in a hurry, as they expect higher levels in the future.

If the bulls can propel the price above $200, the pair could rise to $260 where the bears are likely to mount a stiff resistance. This bullish view will be invalidated if the price turns down and plummets below $140. 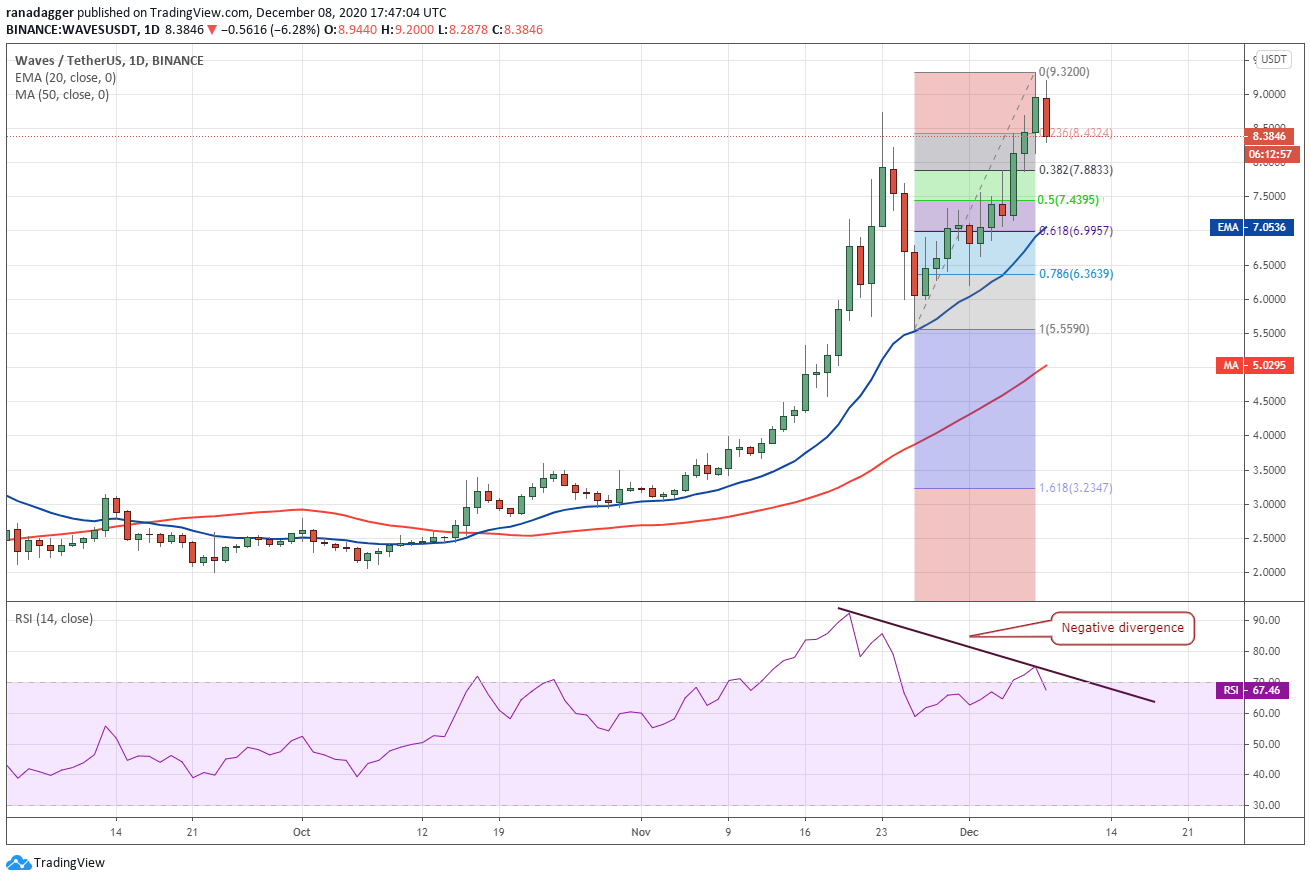 The WAVES/USD pair is currently facing resistance near the psychological level of $10. The first support on the downside is the 38.2% Fibonacci retracement level at $7.8833, and the next is the 20-day EMA at $7.

If the price rebounds off either level, it will suggest that traders are accumulating on dips. The bulls will then try to push the price above the overhead resistance. If they succeed, the next leg of the uptrend could begin with the first target at $13.40 and then $15.

However, the negative divergence on the RSI suggests that the momentum is weakening. If the price dips below the 20-day EMA, it will suggest that the bulls are no longer buying on dips, indicating a shift in the sentiment. This could result in a fall to the next critical support at $5.559.

Axie Infinity’s AXS has rallied from an intraday low at $0.40 on Dec. 1 to an intraday high at $0.63889 at press time today. The 59% rally in the past week shows that the trend favors the bulls. 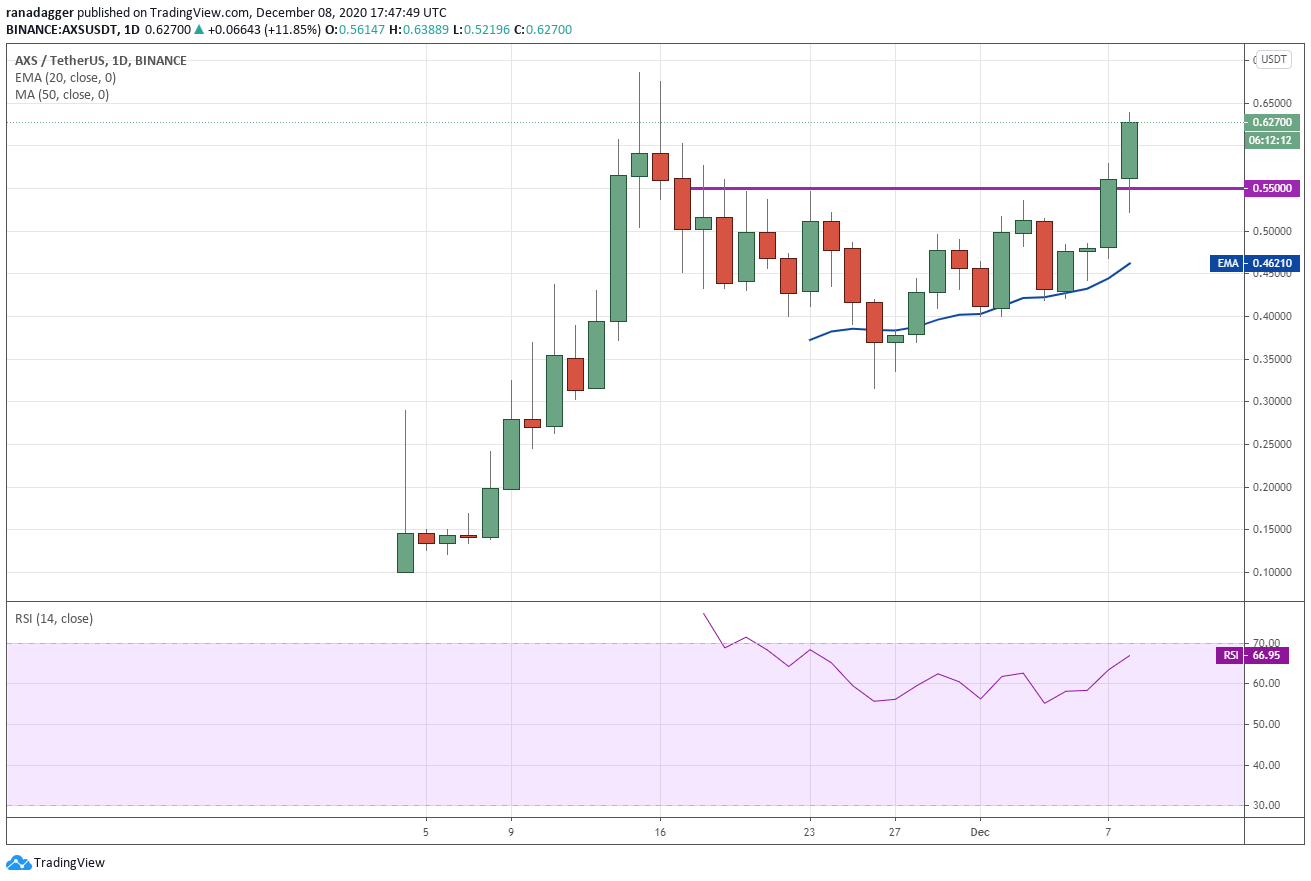 The first target on the upside is $0.90, then the AXS/USD pair could rally to the psychological figure at $1.

Contrary to this assumption, if the bears sink the price below $0.55, a drop to the 20-day EMA ($0.46) is possible. A break below this level will suggest that the bulls have lost their grip. The trend will favor the bears if the price slips below $0.31.

The views and opinions expressed here are solely those of the author and do not necessarily reflect the views of Cointelegraph. Every investment and trading move involves risk, you should conduct your own research when making a decision.