The price of BNT, the native token of Bancor, surged 86% in merely two days from $1.02 to $1.919. The rally was fueled by a combination of Coinbase listing BNT and the growing volume of Bancor’s DEX.

The Coinbase listing was the primary catalyst behind BNT’s strong 48-hour rally. Almost immediately after its announcement, the token’s price increased by around 16% after spiking to as high as $3.70. Coinbase said on Dec. 16:

Although the surprise listing served as a short-term catalyst, BNT has been rallying since early November due to Bancor’s momentum. 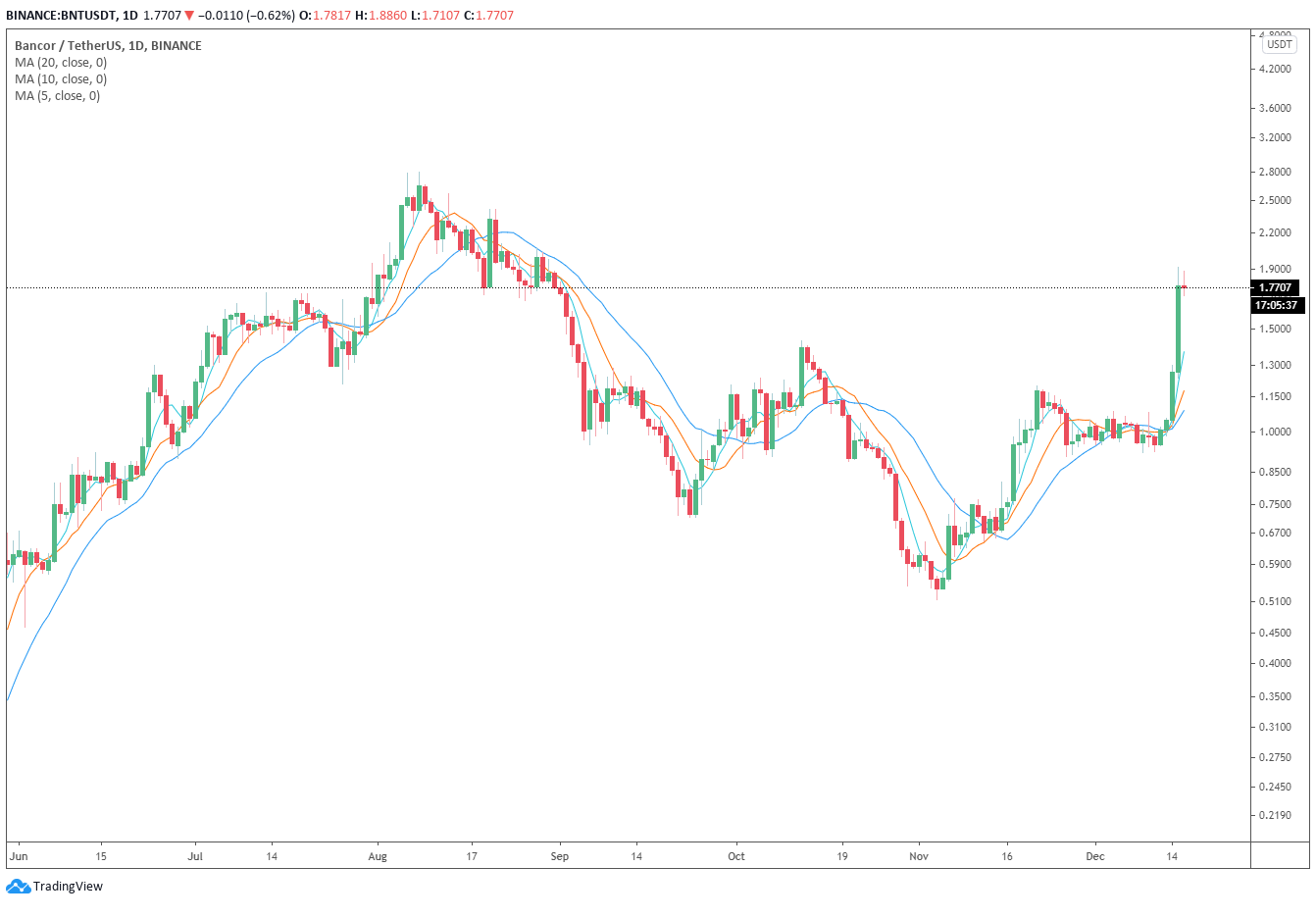 What is Bancor and why is it surging?

Bancor can be described as a decentralized exchange, or DEX, and an automated market maker, or AMM. On the Bancor network, anyone can trade ERC-20 tokens and various crypto assets in a decentralized ecosystem.

With the resurgence of decentralized finance, the daily volume and liquidity of Bancor have continuously increased.

On Nov. 19, Bancor said that the protocol achieved $60 million in total value locked. The team said:

According to data from CoinMarketCap, Bancor has processed nearly $14 million in trades in the last 24 hours. For a decentralized on-chain liquidity protocol, a daily trading volume above $10 million is relatively high.

To compare, SushiSwap and Uniswap, the two largest DEXs on Ethereum, process $44 million and $275 million per day, respectively.

Decentralized applications and DEXs within the DeFi space would have larger room to grow if Bitcoin (BTC) and Ether (ETH) begin to rally in the short term.

Furthermore, Alex Krüger, an economist and trader, pinpointed Bitcoin’s continued retest of $20,000 and the low futures funding rates as the likely catalysts that will propel the predominant cryptocurrency beyond its record-high. He said:

“The more time $BTC spends below 20K and the lower the funding and futures basis as price approaches 20K, the stronger the upwards break once it comes. It will come.”

When the market enters a clear bull cycle, the demand for DeFi services would further increase as borrowing and trading volumes rise. Also, the risk of adding more collateral in Ether to secure margin typically falls when its price is increasing.

As of Dec. 16, the total value locked across DeFi protocols is hovering just under $15 billion, its all-time high.